Every tree is precious

Partner in Applause project is also Tisa d.o.o. as an expert adviser in the field of arboriculture and urban forestry, which is aware of the importance and role of every tree in the city, with no regard to its origin.

Trees are valuable because they clean and filter the air, produce oxygen and bind carbon dioxide. Their presence is improving the quality of living in an urban area. However, if they pose a risk to human health and life they should be removed. 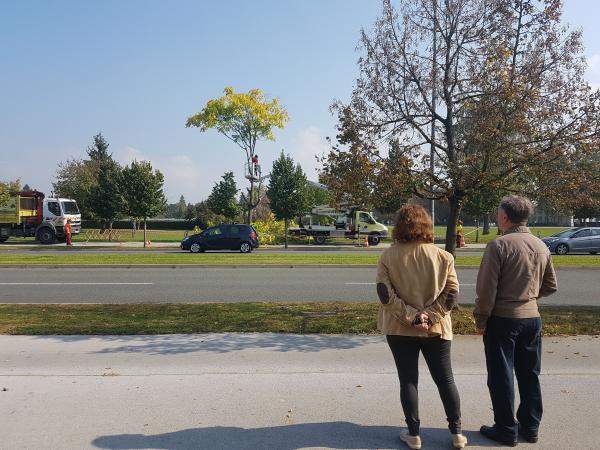 Such a case was a self-standing tree of heaven (Aillanthus altisima (Mill.)Swingle), which grew at the edge of the grassy surface close to a new road with a sidewalk and a bicycle lane near Žale cemetary. This tree had a lot of positive ecological functions and was left standing, despite the fact that it was an invasive alien plant. With the establishment of a new tree line avenue in the immediate vicinity, the standing tree of heaven began to hinder the growth and development of young planted lime trees, so we removed it. This was also used as a workshop for citizens to teach them about a safe way of harvesting trees in urban area and about the effects of invasive alien species.