An example of the NDVI (Normalized Differential Vegetation Index) vegetation index in the eastern area of the city of Ljubljana.

The vegetation cover of the Earth’s surface can change at an unprecedented rate. Especially invasive, non-native species of plants can quickly spread and negatively affect the ecosystems that they enter. In many areas both in the world and in Slovenia, it is assumed that invasive plants have already replaced native shrubs and trees.

In order to detect the extent of these plants and the direction of their spread in a larger area, experts from Slovenian Centre of Excellence for Space Sciences and Technologies Space-Si use and analyze optical satellite imagery or data captured by any other remote sensing technology. Since we can access images of the same location on Earth every few days or weeks (depending on the satellite), we can regularly monitor areas of interest with satellite imagery. For in-depth studies, all accessible, non-cloudy images can be stacked together and composed into a so-called time series, which is further analyzed.

Objects on the Earth’s surface reflect/radiate different wavelengths along the electromagnetic spectrum. Satellite sensors detect a limited amount of these wavelengths, which means that satellite images consist of a different number of spectral bands (e.g. blue, green, (infra)red band). By measuring the energy reflected form the Earth’s surface, we can create a spectral signature of the observed objects. Spectral signature of all types of vegetation detected by satellites – tree crowns, meadows, green agricultural fields etc. – tend to vary relatively consistently with time in a seasonal pattern. To gain information on seasonal vegetation development we use vegetation indices, which derived from the ratios or differences of satellite spectral bands to enhance the contribution of vegetation properties. Vegetation indices reflect certain characteristics of vegetation on the Earth’s surface, mainly chlorophyll state. Periodic phenomena in the plant development cycle or phenological parameters obtained with satellite imagery are validated with field measurements. However, satellite images and field measurements are difficult to compare directly with each other as ground data have large variability due to local specifics and are often observed over small areas. Yet they give us a rough picture of the relationships between them. 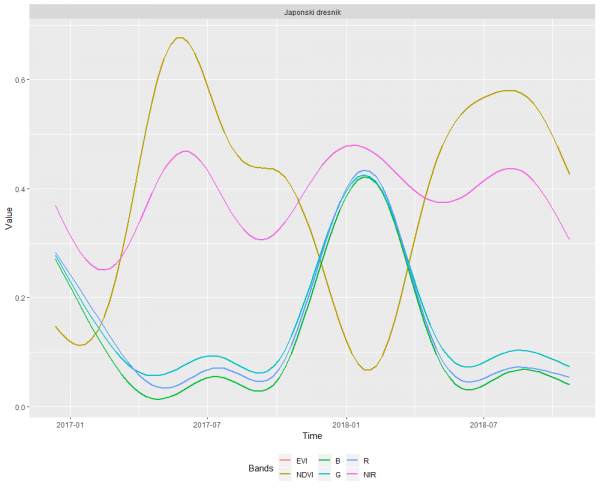 Time series graph of Japanese knotweed in the city of Ljubljana composed from Sentinel-2 images during the last two years (2017, 2018). Values represent vegetation index NDVI, EVI and four spectral bands – blue (B), green (G), red (R) and near-infrared (NIR). Spectral bands are continuous light spectra (colours) that are able to be recognised by the satellite and that give us information on the Earth's surface.

A number of processing steps are required to transform the noisy signals of vegetation indices into smooth seasonal curves (data smoothing). For the purposes of analyzing a certain phenomenon in vegetation, we firstly prepare a time series of one or more vegetation indices. Time series can help us obtain key phenological metrics, like beginning and end of the growing season, length of the season, asymmetry of the season etc., and are essential for the detection of patterns, trends and changes which describe the usual phenomena in the vegetation, and thus allow the modelling and prediction of certain events. On the other hand, sudden changes or vegetation disturbances can be detected, caused by storms, fires or insect infestations etc. Such changes can lead to a rapid decline in canopy foliage, which affects the spectral reflectance, and, consequently, the unexpected values of the vegetation index that deviate from the conventional ones.

Satellite-derived time-series data help us understand vegetation dynamics and their trends over time.