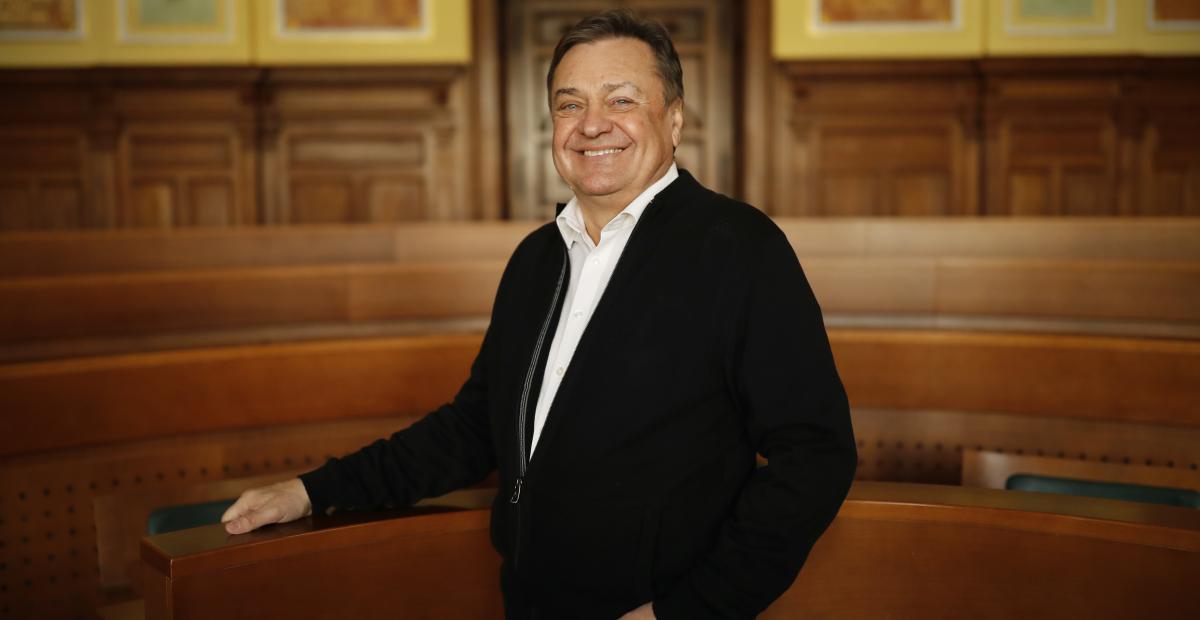 Zoran Janković was born on 1 January 1953 in the village of Saraorci near Smederevo, where he spent his childhood. Subsequently, his family moved to Ljubljana, where he first attended Valentin Vodnik Primary School and Kette and Murn Primary School. He continued his education at Poljane High School and then graduated successfully from Ljubljana University’s Faculty of Economics.

Zoran Janković’s professional career began before he had finished his studies in 1978 in the investment sector at the Slovenian Post Office. Between 1979 and 1984 he represented the Grič Zagreb business as a sales manager and was appointed as acting director of Mercator Investa in 1984, where he worked until 1988. Between 1988 and 1990 he was vice president of Emona SOZD and acting general manager of Emona VPS. In 1990, he founded the Electa company, of which he was director until 1997. In the autumn of that year, Zoran Janković was appointed CEO of retailer Mercator, which he successfully led until November 2005, when representatives of the largest shareholders released him from his duties with no fault attached on his part.

Almost exactly a year later, on 22 October 2006, receiving 62.99% of the votes cast by the citizens of Ljubljana in the first round, he was overwhelmingly elected Mayor of the capital of the Republic of Slovenia. In the parallel election for the City Council, his list of candidates took a majority of the votes cast, and in his first term of office 23 candidates from Zoran Janković’s List were elected to the 45-member council.

At that time, in addition to his work on individual projects, Mayor Zoran Janković, with various colleagues from Mercator, also reshaped the management team of the City of Ljubljana, and transformed the motivation of the city administration and its project focus.

As well as in his office on Mestni trg (City Square), the people of Ljubljana can come across him seven days a week anywhere, at the market, sports fields, in nursery schools and on construction sites. His personal communication is still characterised by his broad smile and instantaneous perception of a problem, knowing how to listen to each application submitted, above all, how to solve multiple problems effectively, always for the benefit of the majority and never to the detriment of minorities.

His tolerance and multicultural awareness are confirmed by providing the conditions for the construction of the Islamic religious-cultural centre and the start of construction in Ljubljana of a Serbian Orthodox Church cultural and pastoral centre. Under the leadership of the current mayor the city has gained new impetus; above all, as a European capital with an adopted vision of spatial development to 2025, he has given Ljubljana back its sense of optimism in a future that is modern, but to the individual a friendly, well-kept and safe place.

In strong competition between global capitals (Vienna, Lisbon, St Petersburg, Riga, Guadalajara and Wellington), as its programme was the most persuasive, a UNESCO commission awarded Ljubljana the title of World Book Capital 2010. Ljubljana was 5th on Forbes magazine's list of ‘Europe's Most Idyllic Places to Live’, while Ljubljana won a Readers Digest magazine survey conducted to find the most honest city in the world. According to research data it is also the safest city in SE Europe.

For the second time in the first round, on Sunday 10 October 2010, Zoran Janković took a majority of votes cast (64.79%) and was duly elected as Mayor of the Slovenian capital. Once again, his List took most voters’ support, and won 25 seats on the 45-member City Council.

For the third time in the first round, on Sunday 25 March 2012, he won a majority of votes cast (60.99%) and was duly elected as Mayor of the Slovenian capital.
At the mayoral elections on 5 October, 2014 the voters have entrusted Zoran Janković with another mandate as a Mayor of the City of Ljubljana. Receiving 57.5 % of votes he was again voted in the first round of the elections.

On Sunday, 18 November 2018, Zoran Janković was elected the Mayor of Ljubljana for the fifth time, again in the first round by a large majority of votes (60.47%). The Zoran Janković List again received the majority support of voters winning as many as 23 seats in the City Council from 45 in total.

In addition to his highly successful business career, until the end of his mandate in October 2011, Zoran Janković was also President of the University of Ljubljana Faculty of Economics Alumni Club.

Zoran Janković is married to Mija Janković and is the father of two adult sons, Damijan and Jure, as well as being the proud grandfather.

Awards and recognitions of Zoran Janković

For his successful work in economy Zoran Janković received as many as 13 highest recognitions and awards:

1. Chamber of Commerce and Industry of Slovenia award for outstanding economic achievements;

2. title »Manager of the Year 2002« awarded by the Managers' Association of Slovenia;

4. title »Most prominent manager« awarded by the Manager magazine;

5. Primus award for excellence in communication awarded by the Slovenian Public Relations Society, the Chamber of Commerce and Industry of Slovenia and the Managers’ Association of Slovenia;

7. title »Most prominent director« awarded by the Manager magazine and Kline & Partner;

9. title »Most prominent director« in the Kline&Partner survey;

11. title »Best Director« as chosen by readers of the Nedeljski dnevnik newspaper;

12. title »Delo's person of the year in politics«;

13. recognition »Top Manager« awarded by the Directorate for Selection of Top Managers in Bosnia and Herzegovina, South-East and Central Europe (in Sarajevo);

As the Mayor of the City of Ljubljana he has received following recognitions and awards:

1. Before the official start of the French Presidency of the Council of the European Union French newspaper Libération published a list of 36 individuals from the 27 EU member states shaping the Europe of tomorrow. Among them there were politicians, business leaders, theatre and film directors, fashion designers, lawyers, European Commissioners and ministers, teachers, priests, journalists, diplomats and only one mayor – Zoran Janković. As stated in the justification of the Parisian newspaper, Zoran Janković is a successful businessman, who was elected Mayor of Ljubljana in the first round of the 2006 elections and embodies the Slovenian success story.

2. He received the plaque Honorary Citizen of the City of Chengdu for his contribution to strengthening the traditionally good relations between the sister cities of Ljubljana and Chengdu in China.

4. The City Mayors Foundation ranked him among the top 25 mayors in the world.

6. The European Association of Managers in Sarajevo awarded him with the Best Mayor of the Decade in South-East and Central Europe recognition.

7. The Union of the Associations for the Values of the National Liberation Movement of Slovenia awarded him with the Golden Plaque for his committed, active and very successful reinforcement of the historical truth, values and achievements of the national liberation movement of the Slovenian nation, respect of victims and preservation of the national liberation movement cultural heritage, and the inclusion of younger generations in preforming programme tasks of the Union.

8. The Braća Karić Foundation presented him with the Foundation award in the field of economy and city development.

9. At the 7th Days of Slovenian Tourism in Kranjska Gora he received the highest recognition of the Tourism and Hospitality Chamber of Slovenia for his significant contribution to the development of Slovenian tourism.

10. The City Association of Retirees Ljubljana declared him an honorary member.

11. President of the Russian Federation Vladimir Putin awarded him with the Order of Friendship for his contribution to strengthening Slovenian-Russian relations and preserving the memory of Russian and Soviet soldiers fallen on Slovenian territory during the First and the Second World War.

12. Mayor and Governor of Vienna Dr Michael Häupl awarded the Grand Decoration of Honour in Gold for Services of the Federal State of Vienna.

Section for international relations and protocol