Ljubljana is the best destination in Europe in 2022

Ljubljana thus became the best among 20 great destinations in Europe, which is an extraordinary success. The Mayor is very proud of the fact that we are all living together in Ljubljana, that we respect all differences, and above all, that everyone is welcome in our capital.

Ljubljana, the green miracle, as European Best Destinations named the capital, was voted the best destination in Europe 2022 at the beginning of this year. This was decided by travellers from all over the world, as much as 92% of the votes came from other countries, which proves the immense international appeal of Ljubljana. Among the 20 highlighted destinations, followers of social networks and the website European Best Destinations chose the Slovenian capital as the destination they would like to visit during their vacation this year.

Maximilien Lejeune, Director of European Best Destinations, who presented the Mayor with the award, pointed out: »World travellers love Ljubljana. It boasts an exceptional quality of life, green areas and accessibility, it is a safe, tolerant, multicultural, optimistic, sporty and family-friendly destination. It is a role model for all European destinations.«

This year, the European Best Destinations organization singles out Ljubljana as the trendiest travel destination, which, in addition to lovers of culture, art, entertainment and nature, is visited by delegations of mayors, environmental consultants and urban planners so they can experience and understand this green miracle in Europe.

Ljubljana is a role model

The prestigious international award is yet another piece of evidence that Ljubljana is becoming a global role model for urban destinations worldwide and is recognized throughout the year as an innovative, lively, colourful and sustainable destination. And precisely sustainability is a key aspect of the strategic development of Ljubljana, which is not only focused on visitors but also on local people, the first and key ambassadors of the most beautiful city in the world. 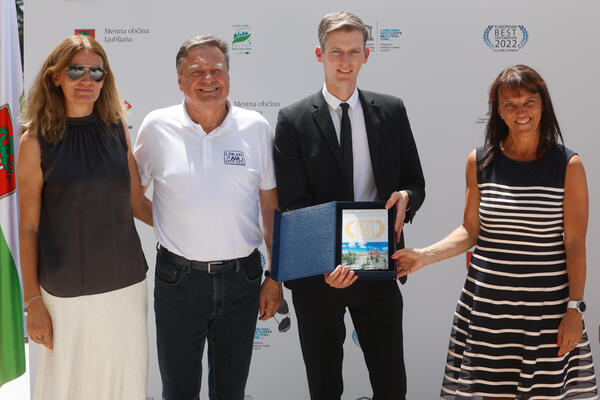 »We are the biggest in the field of stories, heart, sustainability, safety, friendliness, quality of life and culture. And the award we received proves that the world public also recognizes us as such. We are the most desired destination this year, not only for visitors from Europe but from the whole world. Every award means a lot to us, but an award that represents the voice of the people is even more invaluable," added the Director of Ljubljana Tourism, Petra Stušek. MSc.

European Best Destinations is a travel website developed to promote culture and tourism in Europe. In cooperation with tourism organizations and EDEN, the largest network of sustainable tourism destinations established by the European Commission, it promotes a better understanding of the wealth, diversity and quality of European destinations. The European Best Destination competition plays an important role in promoting Europe as the number one destination in the world. It has become a meeting point for tourist organizations and world travellers and the main gateway to discovering Europe.