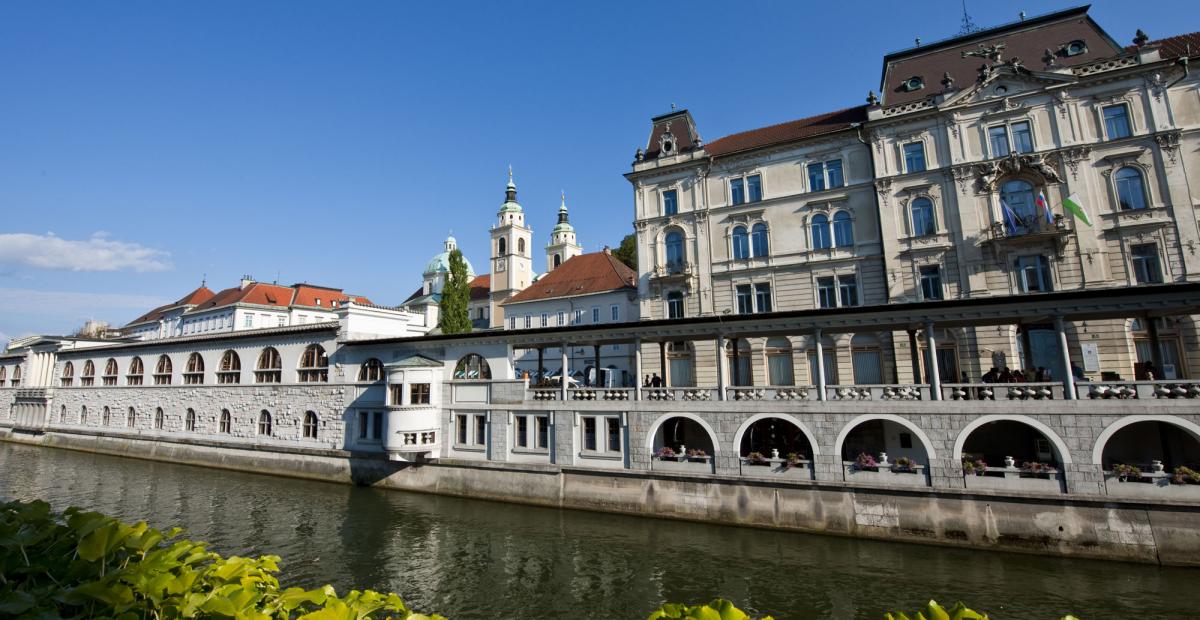 The splendid view of the market. |

The Plečnik House is, between 6th June and 11th October 2020, hosting an exhibition about the architectural planning and craftsmanship of the Plečnik's Market.

As World War I came to its end, the architect Jože Plečnik returned to Ljubljana from Prague with an idea on how to organise the area from the Kresija Palace to the Dragon Bridge.

Following the plans designed by Plečnik, the city’s constructor Matko Curk began building the new Central Market in 1940. Due to World War II and a scarcity of building material, works progressed at a very slow pace and construction lasted from 1940 to 1944.

The Central Market stands on the edge of the Ljubljanica riverbed. Its north side with a façade with a rusticated stone base and semicircular window openings protruding through the plastered façade, is reminiscent of city walls. The long single-pitch roof is covered with concrete tiles of different shapes and sizes. Plečnik recognised the opportunity of designing roof tiles in poured concrete, and often took advantage of this option. The Central Market consists of a flower pavilion at the Triple Bridge, a pillared portico and a colonnade of individual arcades with intermissions. It also has two loggias equipped with wells and views of the Ljubljanica River. The Butchers’ Bridge, planned for the central part of the complex, was sadly never built due to World War II.

In Plečnik’s oeuvre, be it architectural or in urban planning, the Central Market is one of the key elements for the realisation of the Ljubljanica River water axis, alongside the bridges and sluice gates. Purely through its design and quality, the Central Market belongs to the very top of world architecture.

Plečnik’s Central Market is recognised as a cultural monument of national importance and is protected with the Ordinance designating the work of the architect Jože Plečnik in Ljubljana as a cultural monument of national importance (2009). The preservation of the authenticity of architectural image of the monument and regulation of all conservation-restoration works fall under the mission of the Institute for the Protection of Cultural Heritage of Slovenia (IPCHS). Plečnik’s Central Market was part of the UNESCO Nomination File titled Ljubljana: The Timeless, Human Capital Designed by Jože Plečnik, which was submitted earlier this year to the World Heritage Centre in Paris.