The City of Ljubljana project successful at the European UIA competition 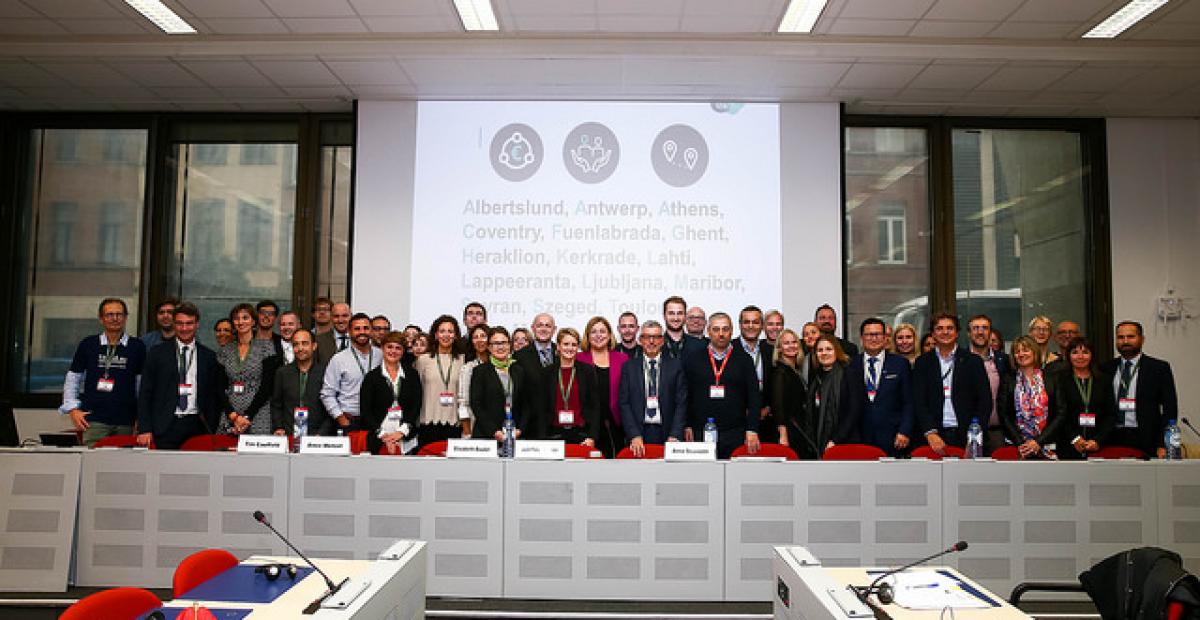 The City of Ljubljana project APPLAUSE (Alien PLAnt SpEcies ) – from harmful to useful with citizens' led activities was granted financing in the second call for proposals of the Urban Innovative Actions (UIA) initiative within the framework of the European Week of Regions and Cities.

The announcement of successful project applications in the second call for proposals of the Urban Innovative Actions (UIA) initiative during the European Week of Regions and Cities was held in Brussels on 10 October 2017. There were 206 project applications sent in for the competition and 16 were chosen for financing, among them also the project APPLAUSE (Alien PLAnt SpEcies ) – from harmful to useful with citizens' led activities prepared under the circular economy topic.

The project addresses unsolved questions with regard to invasive alien species in terms of the zero‑waste approach and circular economy.

At present we are composting or incinerating these plants, and with the pilot project for processing plants into paper at a semi‑industrial level we have proven that they can be utilised for other useful purposes.

The proposed system of managing invasive foreign plants is based on education and cooperation with the citizens of Ljubljana and three principles of operation:

3. »Bring to the collection centre«.

We want to make it easier for the citizens of Ljubljana to recognise invasive non-native plant species on their own and then remove and process them into useful products (1). If they do not want to do that by themselves they will be able to go to the newly planned re-use centre where we can process them together in workshops (2) or they can simply bring them to the new collection centre where project partners can process them in to useful products and then sell them (3). The project addresses the widest possible circle of stakeholders: kindergartens, schools, pupils, students, households, property owners, companies, tourists, professional organisations…

The project is designed innovatively. We are developing a greener way of pre-treating the pulp for paper production – processing with enzymes. Also the so called liquor (waste from the prior preparation of the material for paper) is going to be processed into a starting material for industrial production, for instance vanillin, the intermediate in the production of pharmaceuticals, cosmetics and other fine chemicals. We are also going to find a solution for wood waste which now serves as an energy-generating product but can also be processed into other useful products, such as plates and cutlery. We are going to check the suitability of selected invasive alien plant species for consumption, use them to produce dyes and test them as home products against plant pests. For the purpose of monitoring the distribution of invasive species, in addition to terrain surveys, we are going to use data from the new generation of European satellites for Earth observation Sentinel-2, and ICT is also going to play a significant role in the recognition of invasive species and public communication.

The business model can be applied internationally facilitating new green jobs, new knowledge and the inclusion of hard-to-place jobseekers and people with disabilities. By introducing handicraft workshops in the reuse centre we are preserving traditional crafts, cultural heritage and knowledge.

In addition to the City of Ljubljana, other project partners are: the public company Snaga, the University of Ljubljana (Biotechnical Faculty – departments of biology, agronomy, wood industry and forest industry), the Faculty of Chemistry and Chemical Technology, the Faculty of Natural Sciences and Engineering (department for Textile Engineering, Graphic Communication and Textile Design), the Jožef Stefan Institute, the National Institute of Chemistry, the Pulp and Paper Institute, Tisa d. o. o., GDi GISDATA d. o. o., the Trajna Society, the tipoRenesansa Institute and the Slovenian Centre of Excellence for Space Sciences and Technologies.