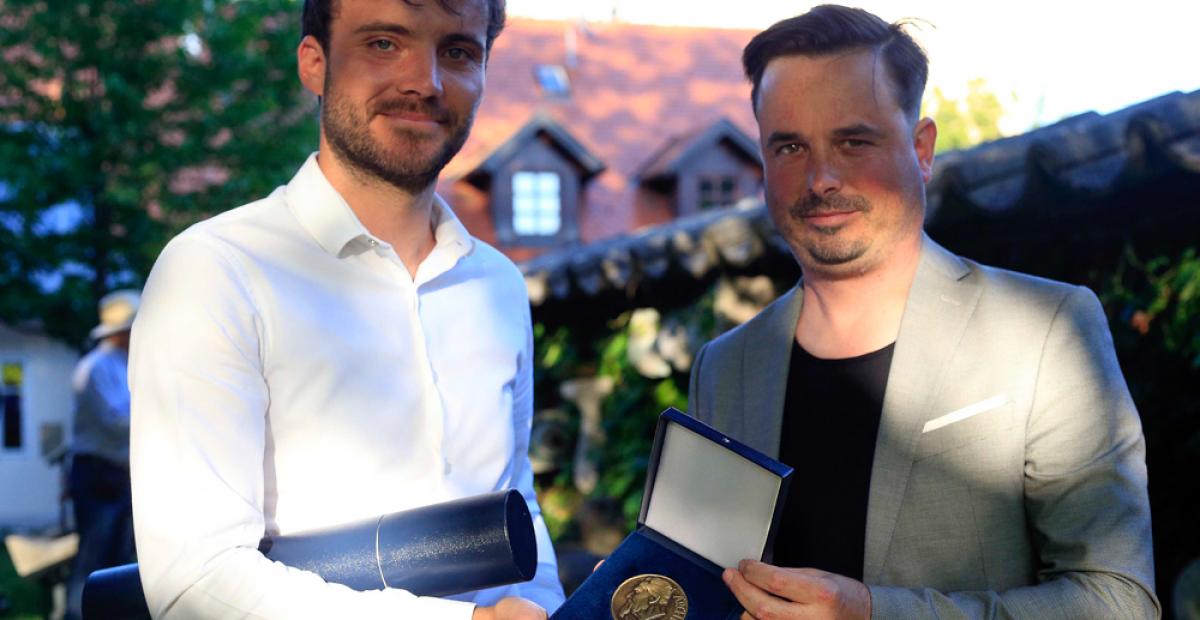 The recepients of the Plečnik prize for the Vižmarje-Brod Hall. |

The recepients of the Plečnik prize for the Vižmarje-Brod Hall. |

The expert jury presenting Plečnik Awards, the highest professional recognitions in the field of contemporary architectural creativity in Slovenia, awarded the Plečnik Medal for Realisation to Rok Žnidaršič and Žiga Ravnikar for the Primary School Vižmarje-Brod Hall.

The expert jury, comprised of architect and professor Tina Gregorič, architect and architectural critic Andrej Hrausky, philosopher Mateja Kurir, architect Aleksander Lužnik and landscape architect Ana Tepina, wrote in its justification: »In the past few years a relatively high number of sports halls was built; as designers were mostly selected in public competitions, their architectural quality was above average. As these are school buildings, for which strict rules apply, one would think this would limit the possibilities for the authors to express their creativity. Nevertheless, the authors of the sports hall managed to find a convincing and fresh solution within their limited options going beyond the usual standards in all aspects. The quality of the total and separate detail solutions convinced the jury which awarded the sports hall Vižmarje-Brod the Plečnik Medal.«

Prize also for the Islamic Religious and Cultural Centre

Plečnik Awards are the main Slovenian professional recognitions in the field of contemporary architectural creativity. Each year the Architect Jože Plečnik Fund presents Slovenian authors with three types of awards for their outstanding work in the opinion of an expert jury, all created within the past five years. The Plečnik Prize is the main and most important recognition. The Plečnik Medal is awarded for a recent realisation or work in the field of architectural theory, criticism and professional journalism or for a contribution to the enrichment of architectural culture. The exhibition of winning and nominated works for Plečnik Awards 2020 is on display until 1 July 2020 in the open-air city gallery on the embankment Krakovski nasip along the Ljubljanica River.