Workshop preparation for the production of wood type for printing

In the 1970s, after almost 500 years in existence, this letterpress technique started fading out due to technological advancement, and most of the equipment, including wood type, was destroyed. Wood type was used for printing posters, because lead letters the size of 5, 10 or more centimeters were too heavy for handling. However, in the last decade, the letterpress technique is receiving quite a bit of attention. It is being rediscovered by artists and graphic designers, and more and more often it is included in the education process at Academies of Fine Arts and Design. It was exactly this deficiency of wood type and its extreme usefulness in the creative process that prompted tipoRenesansa Studio to make the decision to reconstruct the workshop and the manufacturing processes.

The first step was to study source materials and to visit two operating workshops in the USA, alongside Hamilton Wood Type and Printing Museum (henceforth: HWTM). This museum keeps the largest collection of wood type in the world and possesses still functioning equipment for wooden letter manufacture. In Slovenia, wood type for the whole of Yugoslavia was produced by the long-late master of trade, based in a workshop in Zalog village near Ljubljana. In older foreign literature, letter manufacture processes are very sparingly described. In Slovenia, any traces of them are almost entirely wiped out. We were able to collect the majority of the information by interviews, studying literature and letter showcase books in the USA. While in Europe, a true gold mine of information is the Swiss graphic designer Dafi Hühne. 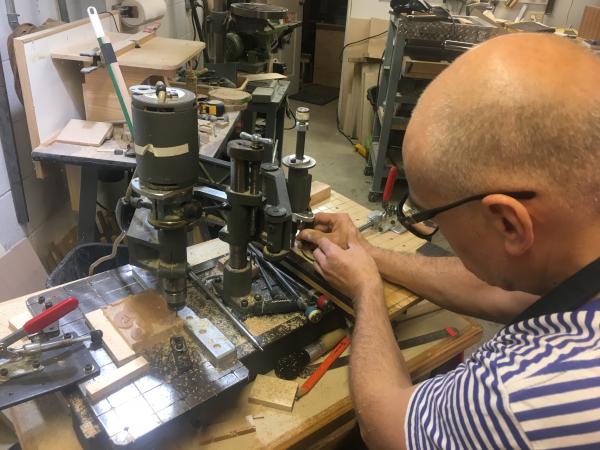 The next step was to choose a suitable tree species, and the reconstruction of the processes of drying and wood type manufacture. The third step was the actual furnishing of the woodworking workshop.

Traditionally, in Europe wood type is made out of pear wood (Pyrus communis), while in the Applause project we are striving to find value in applying invasive tree and plant species. Out of the invasive tree species that grow in the area of the City of Ljubljana, and in collaboration with the Department of Wood Science of the Biotechnical Faculty of Ljubljana (one of the project partners), we made a selection of those species that fit the most criteria. We were focused mainly on the structure and hardness of wood. For example, we eliminated black locust (Robinia pseudoacacia), which is suitable in terms of hardness but due to its porosity, the print would not be smooth. The porosity can be seen in end grain cut.
As the most suitable species we picked boxelder maple (Acer negundo), which was also one of the species often used for wooden letter manufacture in the USA alongside the well-known sugar maple (Acer saccharum).

The tree trunks were provided by the company Tisa, also a project partner, as part of a regular planned logging. The company fells trees that are hazardous due to age or damage, and that have entered the beginning phase of decomposition. Due to the greater dimensional durability, end grain cut wood is used, meaning reels instead of boards. Despite the final letter thickness being 23.56 mm, and according to the recommendation of the Department of Wood Science, we cut reels 50 mm thick in order to prevent loss of material due to possible drying deformation. After cutting, the surfaces were protected with a special agent, which prevents overly fast drying and cracking of wood. After a few months of natural drying, we discovered that the surface pore blocking agent is too strong and actually prevents drying. Radial cracks also appeared, which rendered the reels unusable. No bending occurred. The process of natural drying and wood preparation were thus greatly adjusted according to the findings. 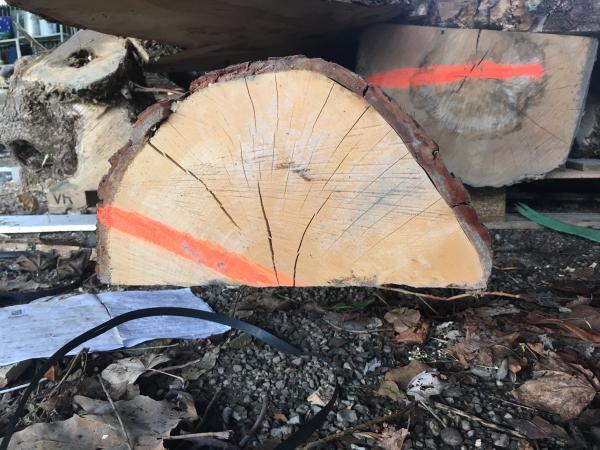 The majority of modern band saws for lumber cutting is automated and does not allow for vertical fastening of trunks. We faced quite a bit of trouble trying to find a contractor who still used old technology. Entire trunks were first cut into reels, and reels were cut in half length-wise right after. By doing this, we prevented cracking. We also decreased the safety thickness. We cut reels 32 mm thick and thus increased efficiency and yield, and shortened the time required for thinning. The use of anti-cracking surface agent was dropped entirely. 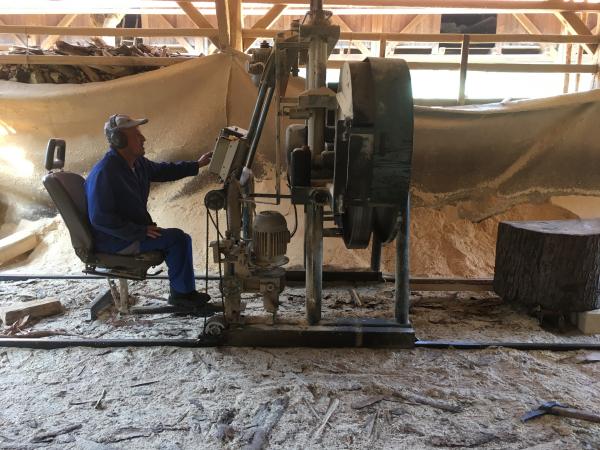 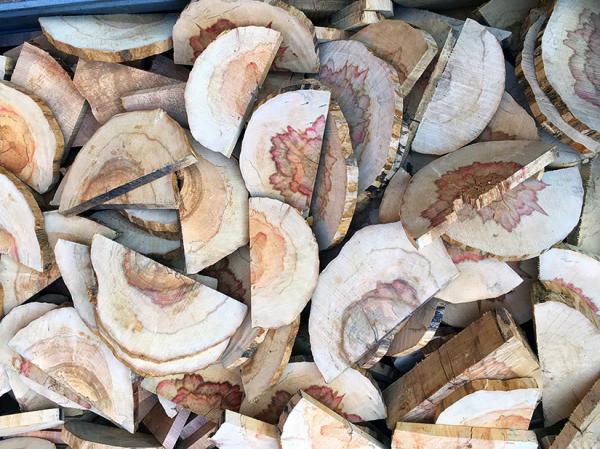 While cutting trunks, a great amount of decomposition was revealed. Despite the relatively suitable diameter of trunks (35-45cm), the heartwood showed signs of decomposition and thus had to be cut out. Cutting out unusable parts is quite time-consuming, as well as about half the lumber being discarded as a consequence. Reels cut this way were then air-dried for three months, which achieved a relative humidity of 15-20%. Humidity was additionally lowered with vacuum-drying and scored a percentage of 7.5-8%. Reels are now ready for handling.

Reconstruction of the workshop

We produced warehousing racks for keeping wooden halves after the example of HWTM. The majority of the effort was put into finding suitable machinery. The first step in wood preparation is thinning of parts to almost the final thickness. In the past, a special block leveler was used, which is unknown to the wood industry. These machines were mostly used in letterpresses for thinning lead supports for cliches. They are extremely rare and there may be only about ten working models left in the world. 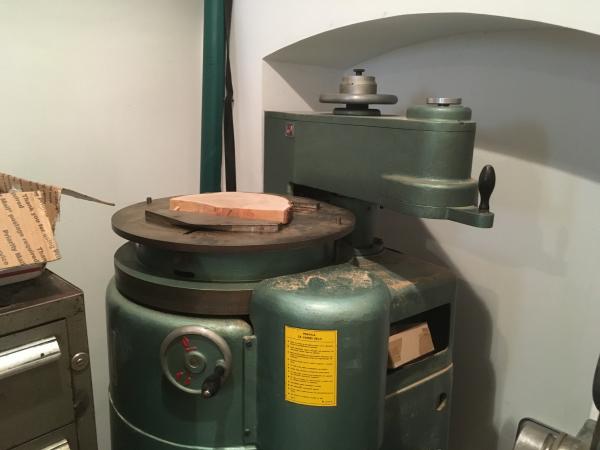 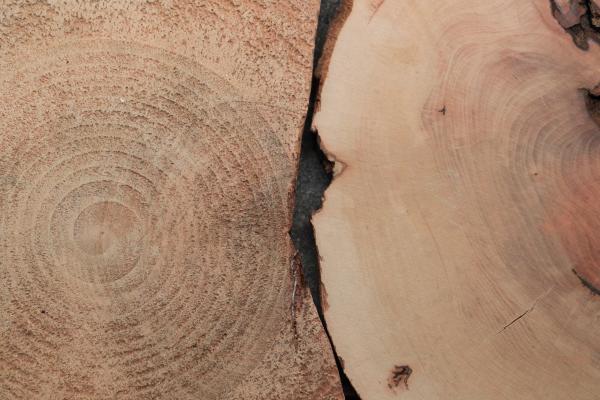 After setting the machine, the wooden plate surface is almost completely flush

After almost a year’s search and by exceptional coincidence, we found such a machine in Slovenian old letterpress tradesman’s. The machine, made by the Swiss company FAG, is incredibly well preserved and came with multiple factory made router bits. The approximately 500kg heavy machine was moved to the workshop and the leveler tests begun. The angles of the bit were previously adjusted for lead processing, so we resharpened them. The final thickness of wood is achieved by drum sander.

What follows is a cut of wooden parts into smaller pieces, suitable for engraving. In the past, special table circular saws were used as well, that smoothed the cut surface with an added router. The specialty of these saws is a measurement scale on the passing table, measured in the-metric unit cicero. The letterpress measurement system is much older than the later standardized metric one. 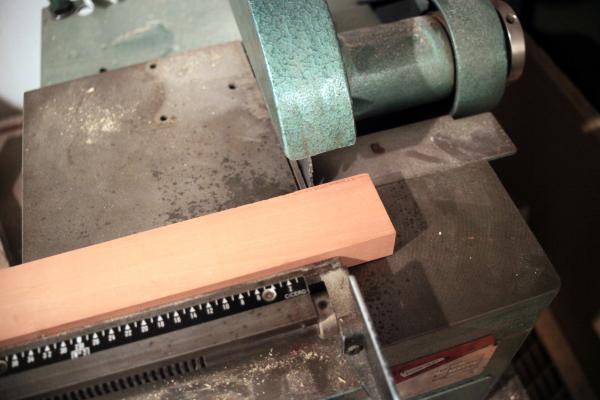 Such circular saws are part of a rare group of machines that were produced in Europe by the already mentioned FAG company, among others. Again, we had exceptional luck in finding the machine after a few months’ search at a retired carpenter’s in Ljubljana. A similar but a little smaller machine was lent to us by our colleagues from DruckZeug workshop in Graz, Austria.
A key machine for letter production is a pantograph. It has three important parts: the table to which an enlarged template (or a pattern) of the letter is attached; the table to which the soon-to-be-processed wood piece is attached; and a massive metal parallelogram that transfers the shape of the template to the wood at a smaller ratio. These machines are universal and were often used in the metal industry in the past (by engravers, toolmakers etc.), and later replaced by (CNC machines). 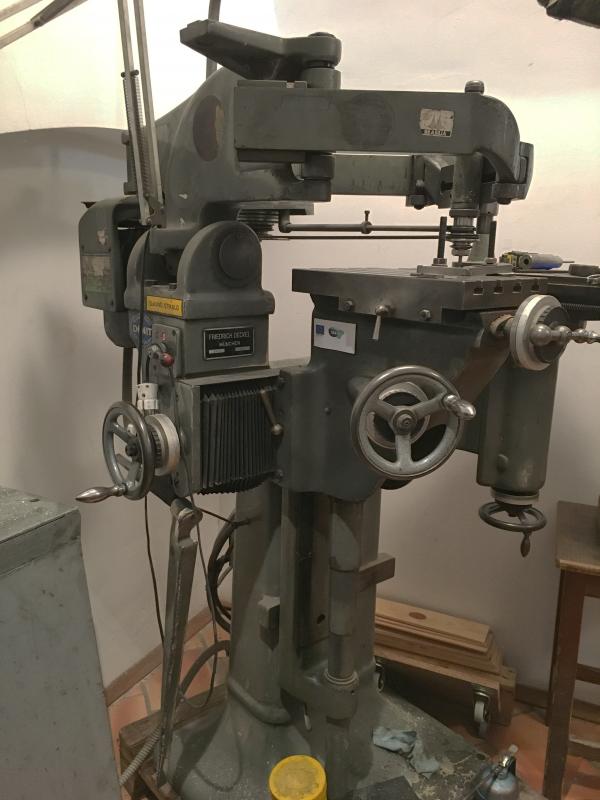 Pantograph Deckel GK-21, used for letter engraving with the help of templates.

We decided to stick to old technology in terms of letter production. We were unable to find a table-top pantograph even after almost a year’s search in Slovenia, and the ones found in other countries greatly exceeded the funds allocated for this purpose. What became available was a more massive, but very well preserved and high-quality pantograph by the brand Deckel. An approximately 600 kg heavy machine was made in the 1960s. We already produced special eccentric clamps for it; our next step is to produce suitable work surfaces on both tables of the machine and purchase of router bits.

Five typefaces by Slovenian typographers will be used for letter production. The first one is Alica by author Alja Herlah. The font is very robust and suitable for poster printing, and was made in the digital era without prior knowledge of it being produced in wood. 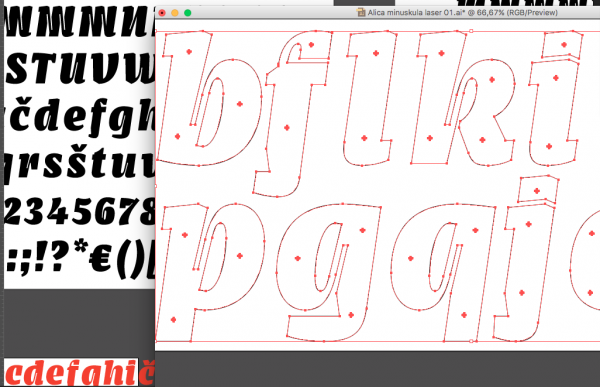 Engraving templates made from plexiglass, before they are cut into individual letters.

Quite a few metric corrections were necessary before we could produce prototype templates from plexiglass. These will be attached to a centimeter thick plywood plate after, of course, being mirrored. The templates are enlarged as letters will be reduced to final size during the process of routing.
The last phase is the dust collection system installation Racks for letter and template storing are already done. The workshop is thus ready for production.