The young design our city

Ljubljana is a city with a young soul with over 58,000 young people between 15 and 29 years of age, which represents 18.8% of all residents. If we also consider the young people who live in the city temporarily, go to school in Ljubljana, or work in the city, the number of young people in the city increases significantly.

Ljubljana supports courageous, creative and determined young people, who give the city its youthful energy and fresh ideas. At the same time, we care for young people with fewer opportunities. Therefore, we are strongly promoting the youth policy, which ensures the city’s development and progress in cooperation with young people.

The City of Ljubljana has received the Youth-Friendly Municipality Certificate for the period between 2012 and 2016, which was extended for the period between 2016 and 2020 for our comprehensive policy, which is successfully being implemented for the benefit of young people. The Certificate is awarded by the  Institute for Youth Policy and the Association of Municipalities and Towns of Slovenia.

We develop modern measures and projects for adolescents

To make future education and life of the young in the city easier, we implement the Strategy of Municipality of Ljubljana for the Young 2016–2025 with the selfexplanatory subtitle “Ljubljana – City of Young for Young”, in which we point out that young people are an important element of a creative, tolerant and friendly city. With the strategy, we implement the policy for the young in all areas of COL operations, whereby we point out three measures: quality work of the young, employment and housing issues.

Strengthening the dialogue with young people

Within the Culture Department of COL, the Youth Office coordinates the activities in the field of working with young people, promotes the implementation of the local policy for the young, and supports projects of public institutions and NGOs for the young. In the last few years, we have noticed the need for an additional strengthening of  the dialogue between the individuals in the youth sector and for creating a political body that would be represented by young people in order to identify the key issues associated with young people. Therefore in 2016, we established the Youth Council as the Mayor’s consulting body, which participates in decision-making about the young people and youth sector matters.

The Cool job! project is a new project introduced in 2016. The long-term objectives of the project are directed towards raising the awareness of employers regarding the importance of employing young people and maximising the number of the permanent employment of young people aged up to 30 years. In 2016 and 2017, we implemented two sets of the Cool job! project and provided 27 young persons a hands-on and quality experience through work at public institutions and companies of COL within the workplace training programme of the Employment Service of Slovenia.

We strive to provide the best possible conditions for young people and their development as well as life in the capital, therefore our activities are steadily upgraded with additional programmes. Therefore, in 2017, we published the first public call for tenders to assign 30 rental apartments of COL PHF to young individuals, young couples and young families between 18 and 29 years of age.

It is the city’s seasonal ticket for young people from 15 to 25 years of age. It combines the shows of various public cultural institutions in Ljubljana and art events, from theatre through film to music and visual programmes. The purpose of the season ticket is to allow young people to visit the most diverse art productions at a lower price.

We provide scholarships for students with outstanding skills and creativity, who stand out from the average through their achievements and successes in school and areas of interest already during their education, and achieve outstanding results on the regional, national and international level.

It has been operating since 1963 and is the biggest centre that develops, promotes and represents creativity of young people in the culturally-artistic and linguistically-cultural field in Ljubljana and in Slovenia. All programmes for children and young people have a common goal: stimulating young people’s creativity, innovativeness and criticality through various  professional activities.

The centre organises numerous activities as well  as encourages children and young people to get involved in different programmes with which they represent themselves at local and international festivals (theatre, music, film, literal, art, dance, research) where they always receive many awards. In 2017, the centre Pionirski dom was chosen at the international call for tenders Creative Europe to be the leading authority of the project and to present its rich knowledge in the field of theatre to partners from Poland, Serbia and Romania.

The number of users of all-year-long activities of the Pionirski dom centre increased by 21% in the period from 2007 to 2017, and the interest for vacation schools is also growing year after year. It operates in the Festival Hall, in the Jenko Dance Centre and since 2008 also in the Art Centre, which was completely renovated in 2017. 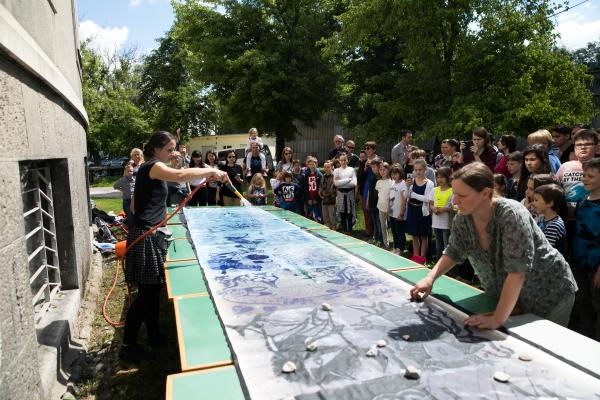 The public institution Young Dragons was established in 2009, however the district youth centre Zalog started operating already in 2007 and the youth centres of Bežigrad and Šiška in 2008. With district youth centres Bežigrad, Črnuče and Zalog, as well as organised leisure youth activities in other district authorities, the public institution Young Dragons is methodically developing into a network of premises and programmes where young people can spend their leisure time in a quality manner, actively, creatively and safely, either participating in organised activities in different areas according to their own interests.

In 2017, Young Dragons took over another important task, which is the coordination of the Youth Centre network of Ljubljana. The number of visits and activities within the public institution Young Dragons is increasing from year to year. Since 2007, they have  executed more than 5,000 various activities for the young, in and out of the centres. Day centres are annually visited by approximately 22,000 visitors. Since 2007, organised activities have recorded more than 112,000 visitors in total and more than 700 volunteers and interns, also from abroad, have participated in the organisation of events and activities.

Ljubljana Youth Centres Network was founded in 2017. Upon its establishment, it incorporated four district youth centres operating within the framework of the public institution Young Dragons, six youth centres managed by non-governmental organisations, and a youth centre operating within the Social Work Centre Moste-Polje. At the beginning of 2018, the Legebitra
Youth Centre joined the network, which already makes 12 youth centres today. The first joint activity of the  network was the organisation of a youth event within the framework of the European Mobility Week 2017. They first introduced themselves to the wider public in a joint appearance at the 2018 Youth Arena. 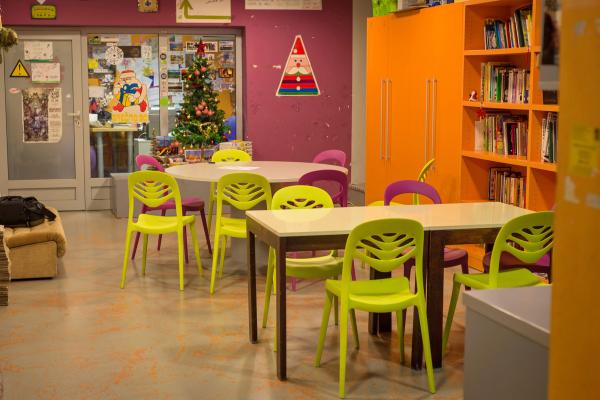 The premises of the Črnuče District Youth Centre

Youth street work is developed and operates within MLADA ULICA network. It coordinates youth work organisations with a common vision of learning about the issues, needs and desires of young people, promoting a respectful attitude towards the environment, and reducing all forms of violations. The group of youth street workers spends time with young people at weekends on various public surfaces in Ljubljana. Communication with young people is established through sharing dustbins and offering free pancakes. Therefore, together with young people, we are creating a common space for new solutions, which allows for a better quality of our coexistence.

Within the COL vandalism-prevention framework of the campaign Man, Take Care of Your City, also an allfemale professional group called ČLOVEKinje (which means female humans) was formed. It cooperates with young people in the activities whose purpose is to strengthen the community’s role to solve topical issues in the local environment. Through field work, they try to resolve the causes that contribute to vandalism and other problematic behaviour.

Many municipal organisations that operate within the Public Holding Ljubljana have since 2013 introduced themselves to young people and somewhat less young visitors of the Student Arena, later renamed into Youth Arena. Participants can enjoy a varied programme and learn about various activities of working with young people, incentives for an active and creative participation, green and (sub)cultural contents, varied sports, and other current topics.