In the City of Ljubljana, we provide the spatial and technical conditions for the operation of district authorities and the implementation of their programmes, in  which also societies, groups, and other stakeholders participate. The facilities are permanently used by 276 different users (entities). The employees of the Local Self-Government Office and the presidents of the district authorities are available to citizens at 51 different locations across Ljubljana.

For the operation of the District Authority Trnovo, we purchased the business premises at Devinska cesta 1b in 2008. Some facilities also feature larger halls, where the ventilation had to be arranged (Cesta II. grupe odredov 43, Prušnikova 99, Belokranjska 6) and an induction loop was installed (Devinska 1b, Zarnikova 3, Polje 12). We have enabled access to the facilities to people with disabilities by installing mobile or fixed ramps.

Equipment of the District Authorities Headquarters

All the headquarters of district authorities were equipped with projection devices as well as with air conditioners, which applies to offices, halls, and conference rooms. Already in 2008, we arranged e-points with computers and free internet access.

Purchase of Defibrillators and Free Workshops on Their Use

To save as many lives as possible, we installed defibrillators at 28 facilities of the Local Self-Government Office from 2014 to 2017 and therefore expanded the network of publicly available defibrillators in Ljubljana. Together with the Slovenian Medical Students’ International Committee and the Red Cross of Slovenia (Ljubljana) we organise free workshops on key CPR procedures, demonstrating the correct use of defibrillators. We organise free measurements of blood pressure, blood glucose level, and cholesterol level within the workshops of the “Think of Your Heart” project of the Slovenian Medical Students’ International Committee.

For many years, we have been providing our citizens with the ability to co-create the budget as well as to participate in projects and measures through different activities and programmes. Representatives of district authorities are a part of regular meetings, where they propose the content which they assess as necessary to be included into the budget. We coordinate priority tasks and at the end of the year also check their implementation.

Since 2007, district authorities have drafted an annual plan of small works referring to the upkeep and maintenance of the public utility infrastructure and implemented by the competent bodies of the City Administration. Each district authority must spend at least 20% of assets they are assigned in a given budgetary year for the implementation of the tasks.

Within the small works, playground equipment was constructed on playgrounds and new playgrounds were arranged, new benches were provided, access for people with physical disabilities was arranged, green surfaces and children’s playgrounds were maintained, new outdoor fitness equipment was installed, footpaths and unpaved roads were repaired, bridges were renovated, plots for safe routes to schools were arranged, etc. In addition, DAs are implementing certain tasks that could also be considered an implementation of direct proposals and initiatives by residents from a specific DA. 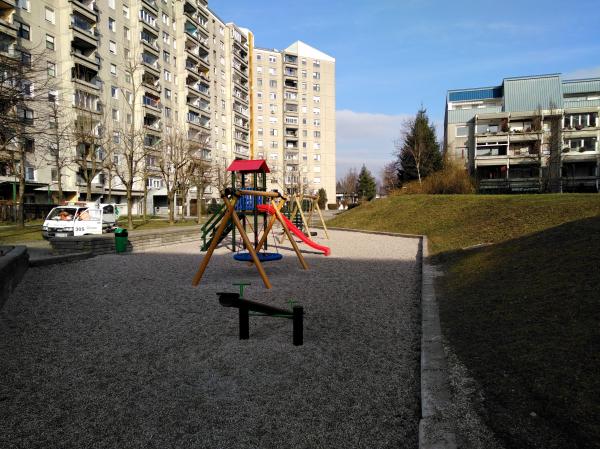 The children’s playground at Rusjanov trg was constructed by DA Moste within the small works.

Construction of the Business and Administrative Centre Zalog

Within a public-private partnership, we constructed the Business and Administrative Centre Zalog, where the first floor of the newly-built facility is dedicated to numerous public programmes and activities.

The following institutions therefore received their own premises:
• Ljubljana City Library,
• a music school,
• Daily Activity Centre for the Elderly.

In addition, the modern centre also features a recreation hall, event hall, and a movie theatre, a shop on the ground floor and also parking spaces next to the building.