Methane fuelled vehicles or compressed natural gas powered vehicles (CNG) are environmentally friendly as they produce less harmful emissions, do not produce particles, and cause less noise. The costs and fuel consumption are lower, and the engine and the catalyser have a longer life span. By the end of 2017, the public companies and institutions as well as the City Administration of the City of Ljubljana introduced more than 200 CNG company vehicles. This is helping us implement the vision of responsible attitude towards the environment and contribute to a greater air quality in the capital. Ljubljana has two public charging stations for methane-fuelled vehicles: at Cesta Ljubljanske brigade 1 (since 2011) and at the P+R Dolgi most (since 2016).

At the end of 2017, the first public charging station for trucks running on liquefied natural gas (LNG) in Slovenia was opened in Ljubljana as a result of the European project of introducing LNG fuel in the entire Slovenia – the Connecting Europe Facility for 2015. Introducing LNG as fuel in freight traffic is an important step towards the reduction of the carbon footprint and emissions from traffic and is a way of decarbonising transport.

Electric power is more environmentally friendly than fossil fuels, therefore we adopted the Electromobility Strategy in the City of Ljubljana in May 2013 in order to upgrade the already adopted sustainability-oriented strategies and measures. By changing the existing decrees, we are also promoting electromobility.

At the end of 2017, the public companies and institutions as well as the City Administration of the City of Ljubljana were already using 50 electric vehicles, including six “Kavalir” electric vehicles, which are available to the visitors of the city centre free of charge.

On-demand rides with electric vehicles EURBAN were implemented in its test phase in 2016 on the line 26 (Tuji Grm–Mali Lipoglav), later introduced as a regular Ljubljanski potniški promet line due to the increased passengers demand. Outside the rush hour, the same transport option is available on line 23 in Podutik. In 2016 at the festival of electric vehicles ECO MEET, we were awarded the title “Best Eco Transport in Ljubljana” for electric personal vehicles EURBAN and the on-demand ride service. At the event EKO RELI 2016 and 2017, the employees of public company Ljubljanski potniški promet ranked first for the most economical drive with zero emissions.

With the electric train Urban, we introduced an attractive tourist circular route connecting the main attractions of Ljubljana in 2016. In the first year of its operation, 17,000 passengers were transported around Ljubljana with the train. Electric train Urban starts its circular route in the vicinity of the Town Hall, it goes to the Ljubljana Castle, then takes you alongside the banks of the Ljubljanica River over the Trnovski pristan Embankment, through the contemporary centre of Ljubljana, past the Opera, the Modern Gallery and the Prešeren Square with the Triple Bridge, returning to the starting point. You can board the train at different stops and combine your wonderful exploration of Ljubljana with visits to the gallery, the castle and other sites, or you can simply bathe in the sun next to the Ljubljanica River along the route while enjoying your favourite drink or stopping for lunch, and then take the train again. Or you can complete the whole circular route on the train and learn a lot about Ljubljana. 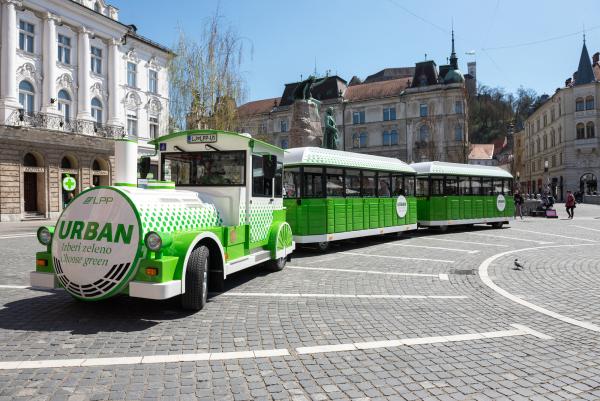 In July 2016, a 100% electric car sharing project was introduced in Ljubljana. The system for which the entire service (booking, unlocking the vehicle, engine start, final payment) is performed via the mobile app Avant2Go, was developed by the company Avantcar. Vehicle users save 100 grams of CO2 emissions with each kilometre and by renting it instead of owning a vehicle the costs of mobility are lower, users can travel without harmful emissions and cause no noise. At the end of 2017, the fleet encompassed over 100 completely electric vehicles. Users completed more than one million emission-free kilometres in total with the vehicles. Each vehicle is under optimal conditions on average shared by 25 users and replaces 10–20 owned vehicles. 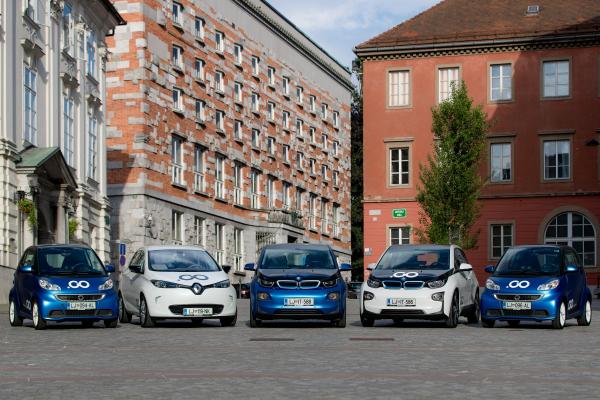 Car journeys are nowadays difficult to be completely avoided, however we can make sure that they are environmentally friendly, and we can encourage car sharing and car pooling. A photo of Avant2Go sharing electric vehicles. Photo: Avant2Go