Can you still remember how Plečnik’s Triple Bridge used to tremble under the weight of buses and cars crossing it every day?

In 2007, with the renovation of the Wolfova cesta street and the Prešernov trg square, we began redesigning the city centre, not only with the renovation of the municipal infrastructure and a pedestrian-friendlier pavement, but also with the gradual closure of the city centre for all motorised vehicles, where only delivery vehicles are allowed between 6am and 10am (for vehicles with permits).

We have redesigned former parking spaces into the central event and social areas – Kongresni trg square (with underground parking garage), Trg republike, Novi trg, Breg. Today, pedestrians and cyclists can enjoy more than 10 hectares of surfaces in the city centre dedicated especially to them, which also results in less emissions and noise caused by traffic.

Once full of cars, today one of the main event and social areas

One of the main event and social areas is currently Kongresni trg, which was renovated in 2011 and is now free of vehicles. It has undergone extensive archaeological research. The park and the paved areas have been redesigned according to the requirements of the Institute for the Protection of Cultural Heritage (Monument of national importance – Plečnik’s
heritage). We opened a parking garage under Kongresni trg in July 2011, offering 720 parking spaces on five underground floors. 334 parking spaces are available to the residents of the city centre who live in the restricted traffic areas.

Shortening distances with bridges and footbridges

The Gallus Embankment was renovated last at the end of 2017, nicely rounding up the renovations of the Ljubljanica embankments from the Dragon Bridge to the Šentjakob Bridge, which directs pedestrians and cyclists along the promenade to Špica along one of Plečnik’s urban axes – the water axis.

For the Rearrangement of the Ljubljanica Embankments and Bridges project, we received the European Prize for Urban Public Space (2012) among 347 submitted projects from 36 European countries.

In the pedestrian zone in the city centre, residents and visitors alike can use the “Kavalir” electric vehicles for free throughout the year.

The public company Ljubljanski potniški promet introduced the first two vehicles in 2009, when we took part in the European initiative CIVITAS ELAN and thus implemented the “demand-responsive transport service”, initially as a test.

In 2017, the Ljubljanski potniški promet fleet already featured a total of six such vehicles – three of them were open and three closed. Due to the vehicles’ low speed, they will easily stop when hailed by potential riders. The friendly drivers will also gladly respond to requests for a ride by phone. Up to five passengers at once can use a free ride. The vehicles do not follow pre-defined routes and stops, but rather operate on-demand according to the passengers’ request. By the end of 2017, the Kavalir vehicles have transported more than 1.2 million passengers.

The name Kavalir (meaning a cavalier, a gentleman) was chosen according to its noble function: the service offers free-of-charge rides in the city centre to all, especially to persons with reduced mobility, and their drivers are known for their friendliness and courtliness. 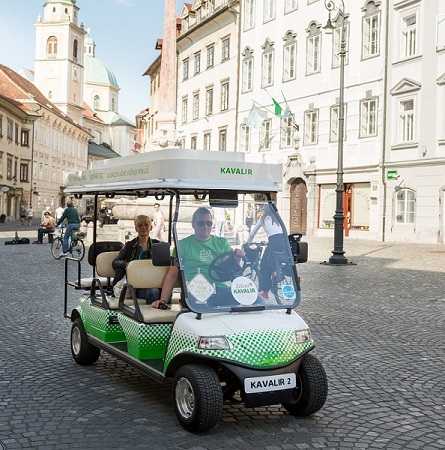 One of the most visible measures for introducing a high-quality public space in the city centre is the rearrangement of a part of the main traffic axis – Slovenska cesta – into an area dedicated to pedestrians, cyclists and city bus users.

By terminating access for personal motor vehicles to its middle part in 2015, we reduced black carbon concentrations by 70% during background measurements (at the same time, air quality in the surrounding streets did not decrease but has remained the same). This proves that the right measures can strongly impact local air quality improvement. Furthermore, the noise previously caused by private vehicles has been reduced by around 6dB.

We have also conducted archaeological research and renovated inner street layers (replacement of the sewage pipes, installations, etc). Later on, we partially opened the area to non-motorised traffic to test the functionality of the new space. A special pavement and a 400-metre-long tree allée with 63 small ashes planted along the eastern edge of the street are the most distinctive elements of the Slovenska cesta redesign.

By renovating Cankarjeva cesta, more space was dedicated to pedestrians and cyclists. It was also the last missing part to revive the idea of the promenade between the Robba Fountain and the Tivoli Castle, which once already was a major draw of the area. 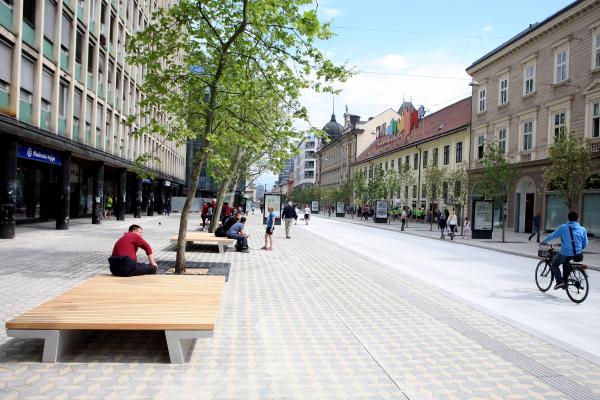 The rearrangement of Slovenska cesta is supported by 88% of respondents in the survey conducted during the drafting of the Sustainable Urban Mobility Plan in 2017. 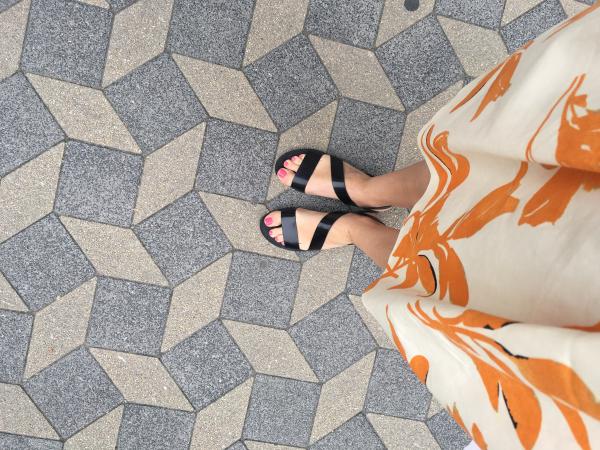 The pavestones on the renovated Slovenska cesta are laid out in an interesting geometric pattern, which makes it a popular place for the citizens of Ljubljana to take photos. For that purpose, we have developed a project on Instagram called #LJfootie.

The Fabiani Bridge between the two former Cukrarna sugar factory buildings was constructed in 2012, connecting the streets Njegoševa cesta and Roška cesta, thus completing the inner ring road. This allowed for further restricted access for private motor vehicles to the inner city centre. The completion of the bridge and the inner ring road brought the idea of architect and urban planner Max Fabiani to life. Fabiani designed this concept in his urban development plan more than a hundred years ago. One of the key elements of his plan was also a ring road around the city centre. The upper level of the bridge is used by motor vehicles, whereas the lower level serves pedestrians and cyclists.

In 2018 we opened a new roller skate park under the Fabiani Bridge which has revived the whole lower part of the Fabiani Bridge. We have set up the park on the initiative of roller skaters, it is equipped with a semi-circular mini ramp, mounted between 4 pillars of the bridge, and two smaller concrete elements. The entrance has a double swinging door and we have also provided lighting so roller skaters can use it in the evening hours, as well.