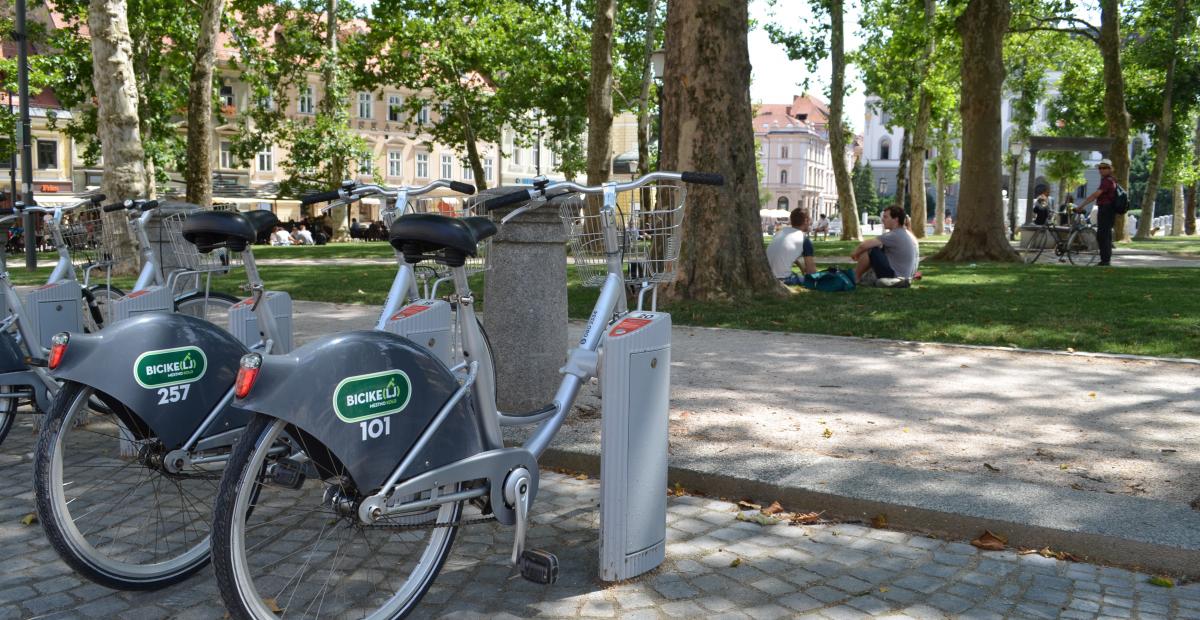 We are proud that Ljubljana is a cycling-friendly city.

According to data from 2013 11.1% of journeys are made by bicycle, but considering the increase in cycling (data from counters) we are estimating the number is around 16%. In addition to numerous infrastructural improvements and other measures, the immensely popular bicycle-rental system BicikeLJ has also contributed to the rise in cycling in the city.
Automated bicycle counters regularly measure bicycle traffic in both directions. In 2016 they registered a total of 3,812,410 bicycle rides, 3,736,302 in 2017, and in 2018 as many as 3,939,461, in total.

Ljubljana has approximately 300 kilometres of set up bicycle lanes, in total. In addition, cycling is also permitted in the opposite direction on select one-way streets, namely, on over 70 such streets.

Construction works have concluded on Drenikova ulica, Vodnikova cesta, Prešernova cesta and Litijska cesta, Parmova ulica is still under construction, and next year works are planned on Dunajska cesta and Tržaška cesta.

On 31 December 2019, 196,399 users were registered in the BicikeLJ system, 42,857 of them active. In 2019 there were 1,139,738 rentals recorded. Since 12 May 2011, when the BicikeLJ system was introduced, over 6.9 million bicycle rentals were recorded.
Representatives of the company JCDecaux, which developed the self-service bicycle rental system, informed us during their visit to Ljubljana last year, that according to their data we hold the first place in the world in BicikeLJ use. On average, each bicycle in Ljubljana is rented as many as eight times a day.

The popularity of the system has exceeded all expectations, that is why we are constantly expanding the station and bicycle network. Now there are already 610 bicycles at 61 stations available to users. In the magazine Marketing Magazin the BicikeLJ system was named the media innovation of the decade, which is a great success for the private partner Europlakat and the city promoting sustainable mobility with the rental system.

At a brownfield area along Celovška cesta we set up a pump track Bike Park Šiška, we also opened Bike Park Bežigrad and Bike Park Fužine, which is the biggest one in Slovenia. Soon Bike Park Vič is opening. We also commissioned the Cycling Association Rajd to turn an abandoned quarry in Podutik into a bike park.

The aim of four thematic cycling paths is to set up attractive cycling connections between different parts of Ljubljana on less congested streets for daily bicycle journeys.

8. Among 20 most bicycle-friendly cities in the world

In 2015, Ljubljana took the 13th place, and in 2017 it improved its ranking, namely, it made it as high as the 8th place on the »Copenhagenize Bicycle Friendly Cities Index 2017«. Again this year, the third time already, Ljubljana made it on the list of 20 most bicycle-friendly cities in the world, The Copenhagenize Index. This time we took the 14th place.

During the EMW 2019 we successfully implemented all planed measures, activities and events, namely, 13 sustainable measures, 17 week-long activities as well as 48 events and one-day activities. One of the most popular activities was the free-of-charge bike repair shop for all citizens.