Join us on Wednesday, 15th June!

On Wednesday, 15 June 2022, we are preparing a mass bike parade in Ljubljana, to which we invite all cycling enthusiasts.


From 14 to 17 June 2022, we will host the Velo-city 2022 Ljubljana, the world's largest conference in the field of cycling, and within its framework, we are also organising a cycling festival and parade, both admission-free for all participants.

On Wednesday, 15 June 2022, cycling will take centre stage in Ljubljana. The bike festival Cycling the change will take place in Congress Square from 10:00 to 22:00. Public institutions and companies, associations and other organizations working in the field of sustainable mobility, sports, health and environmental protection will present their activities on stands until 19:00. There will be many interesting things happening on the stands and cycling ranges. In addition, a rich program will run on the stage throughout the day with performances for children, dance and music acts and animations. The festival will conclude with a performance by Sara Lamprečnik with her group, presenting the official song of the festival, Change is strange, and the event will be rounded off by an evening surprise concert, which is expected to begin at 21:00.

The event will culminate in the afternoon when we will embark on a bike parade, mass cycling on the roads and streets of Ljubljana, with which we want to encourage as many people as possible to cycle. The cycling parade will start at 19:00 in front of the Ljubljana Exhibition and Convention Centre, otherwise the central venue of the Velo-city conference. The cyclists will then set off on an 11-kilometer-long route that will take them to their destination at Congress Square, the venue of the cycling festival.

The bike parade will be connected to the Franja BTC City Marathon, which will be held a few days earlier, on 11 and 12 June 2022. Both events will be organized by the Rog Cycling Club, which also handles the registration for the cycling parade.

Participation in the cycling parade is admission-free, and participants are asked to register here. The registration is open until Tuesday, 14 June 2022. You need your bike and good spirits for the parade. You can join the cyclists anywhere on the route, you can cycle the whole route or only part of it. 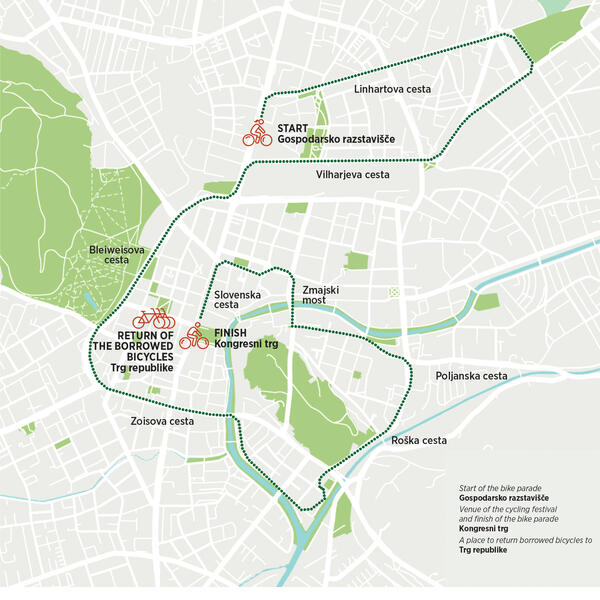 City buses will run on alternative routes, information on detours will be published on the website www.lpp.si.

Participants of the Velo-city conference will participate in the bike parade on bicycles from the BicikeLJ self-service system. Therefore, the stations will be closed from 12:00 on Wednesday, 15 June 2022, so bike rental will not be possible. All bicycle users from the BicikeLJ system are asked for understanding.

Joining the activities is also the public passenger traffic company LPP d.o.o., which has been testing differently powered buses over the years, which are more environmentally friendly than diesel and petrol vehicles. There are already methane powered buses in the fleet, and we want to supplement it with electric buses.

Two of them will be tested on the streets of Ljubljana between 14 and 17 June 2022. We expect to include them on line 2. The first bus, manufactured by IVECO, will be tested on all four days of the conference, and the second MAN bus only on the 14 and 15 June. During this time, both buses will have foreign license plates, the first French and the second German.