In May 2008, Ljubljana hosted a meeting of the mayors of EU, of EU candidate countries, and the EU expansion member states. Photo: City of Ljubljana archive

Over the past half a century, Ljubljana has entered 25 partnership agreements with other cities, approximately a third of them capitals. Even though worldwide, Ljubljana is a small capital when it comes to its surface area and population, it attracts renowned international guests. The position of Ljubljana in the international environment is strengthened through our active cooperation in intercity international organisations and networks.

Since the international recognition and image of Ljubljana and its management have been on the rise, representatives of COL have been receiving an increasing number of invitations to bilateral meetings in European and global cities as well as numerous multilateral events – professional conferences, congresses, and international political meetings. Representatives of the City of Ljubljana are welcome and desired participants in numerous discussions about the challenges that cities face as well as about the opportunities for further urban development.

We organize and host many international events in the City of Ljubljana. We highlight some of the most important ones that we have hosted in recent years and that have brought many senior representatives of cities and organizations to the city.

Ljubljana has proven itself as a good host and impressed the visitors of the 13th CIVITAS Forum, the most important European conference in the field of sustainable urban mobility, which was held in our city in October 2015. The successfully concluded forum with the main topic »Sharing the City« brought together a record number of participants, namely, some 560 people from 48 countries, among them political representatives from many European cities, city administrations and organisations, experts and interested individuals who are in their line of work dealing predominantly with mobility, spatial planning, environmental studies and other aspects of creating friendlier cities, accessible to all, as well as innovators and producers of interesting products in the field of sustainable mobility. 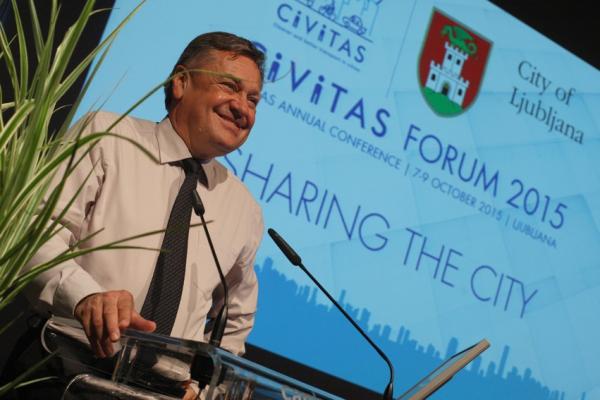 The European Green Capital 2016 title guaranteed Ljubljana a special place on the map of cities where sustainable development is crucial. We marked the year with a year-long program, numerous events and activities, and hosted a number of senior representatives in the city. Abroad, we have given more than 50 presentations of the Ljubljana, European Green Capital 2016 project. We have also recorded an increased participation at international conferences focusing on the measures aimed at increasing the quality of living of citizens.

We attracted the highest number of visitors to our city in March when Ljubljana officially marked the green year with a whole-day program of events culminating in the opening ceremony at Stožice. The official speakers were Prime Minister of the Republic of Slovenia Dr Miro Cerar, European Commissioner for Environment, Maritime Affairs and Fisheries Karmenu Vella, European Commissioner for Mobility and Transport Violeta Bulc and Mayor Zoran Janković. The opening ceremony was broadcast live by Television Slovenia.

EUROCITIES Conference with circular economy as its main theme

Since 2015, we have been a member of the Executive Committee of the most representative European intercity network EUROCITIES, connecting representatives of more than 140 large cities with a population of a total of 130 million. The City of Ljubljana has been actively cooperating at environmental, mobility, social care and culture forum within the Eurocities organisation. Lately, we have been a very active member also in a special circular economy work group.

During the European Circular Economy Month 2017, we organised and hosted the annual EUROCITIES conference in Ljubljana. The conference featured more than 600 delegates from 120 European cities, 60 mayors and deputy mayors. The event was also visited by the European Commissioner for Mobility and Transport Violeta  Bulc. The keynote speaker Dr. Janez Potočnik introduced the role of circular economy in cities. In addition to innovative contents, the programme also featured round tables, where the participants discussed society, partnerships, economy, and growth according to the principles of circularity. The event was completely redesigned at a higher level, which will certainly be a big challenge for future organisers.